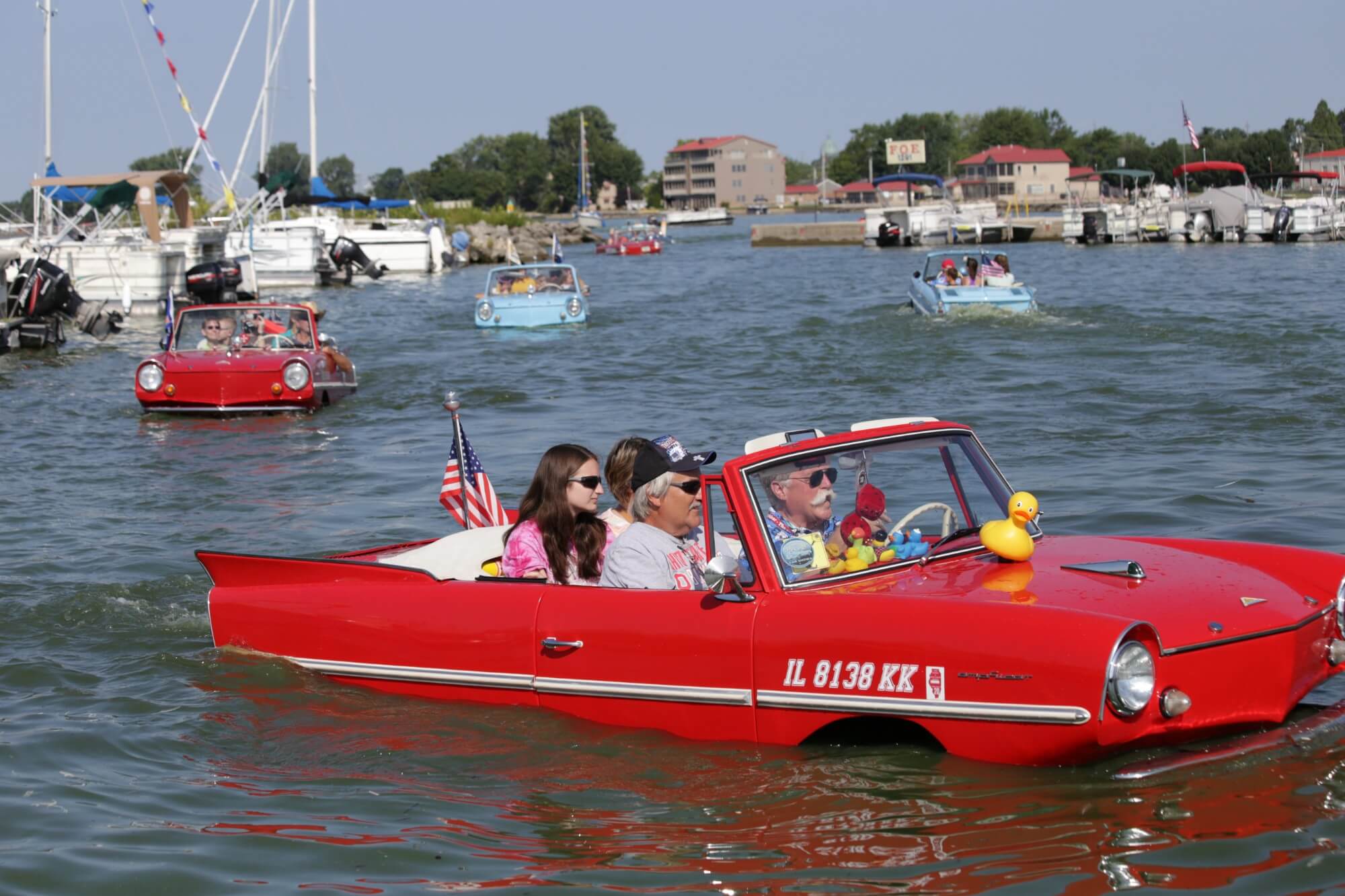 The only civilian amphibious passenger automobile ever to be mass-produced will be splashing in again at the 2021 Celina Lake Festival!   This year marks the 21th year that the International Amphicar Owners Club has attended the annual Amphicar Swim-in at the Celina Lake Festival.  Everyone loves seeing these little vehicles drive on land and then splash-into the water and become a boat.    3,878 Amphicars were built in Germany from 1961 to 1968.  Of those cars, 3,046 were imported into the United States. It is believed that there are less than 600 sea-worthy still in existence today.

The Amphicar has a top speed of 7 mph on water and 70 mph on land.  An Amphicar is moved in the water by its twin nylon propellers. A special two-part land-and-water transmission built by Hermes (makers of the Porsche transmission) allows the wheels and propellers to be operated either independently or simultaneously. The “land transmission” is a 4-speed-plus-reverse unit similar to those found in the old Volkswagen Beetles. The “water transmission” is a 2-speed offering unique to the Amphicar featuring single forward and reverse gears. In the water, the front wheels act as rudders.

When new, an Amphicar sold for between $2,800 and $3,300, depending on the year.  All Amphicars are convertibles and were originally offered in only 4 colors: Beach White, Regatta Red, Lagoon Blue and Fjord Green (Aqua).   You will find many today that have been customized with paint and accessories. Some of the more unique include one adorned with Pink Flamingoes, one painted to resemble the Bat Mobile and another to resemble a huge Rubber Ducky.

Each year 30 to 40 members of the International Amphi-Car Owners Club bring their vehicles for an appearance at the festival.  You will begin seeing the cars on Tuesday and Wednesday of festival week as they drive around town and cruise along in the lake.  Their official festival appearances include a Swim-In on Friday evening and you can see the entire contingent of Amphicars as they take part in the Grand Parade on Saturday evening.

The Celina Lake Festival, set for July 23-25, 2021, offers plenty of summer fun for the entire family including a huge collector car show, kiddie tractor pulls, a large craft show, a cruise in, a patriotic boat parade and the cardboard duct tape boat races.  The festival will also feature free live music. Another Round will grace the stage on Friday night and on Saturday night enjoy the music of Exploit with special guest Lauren Jean.  Sunday is a special treat for the kids with lots of free fun including a kids fishing derby, archery and canoeing.   Along with the Amphicars, other top attractions this year will be the Friday night, Fabulous Fireworks over the lake and the Saturday evening Grand Parade.